We at Delta Blue Blueberries consider blueberries to be one of the sweetest treats in the fruit family. They’re super easy to integrate into your diet at any meal of the day or even as a snack, and not only are they packed full of flavor, they have a lot of health benefits. We believe that makes them even sweeter. One of the latest ways that blueberries have been seen as a benefit to our health is as a way of helping manage insulin in diabetics. 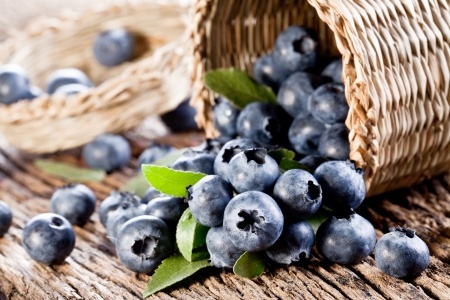 There are two types of diabetes: Type I and Type II. Type I diabetes (more commonly known as Juvenile Onset Diabetes), is a condition that attacks the cells that develop insulin. Without insulin, the body cannot properly break down sugars. Type II diabetes, on the other hand, is a condition that can be developed at any age. In Type II diabetes, the body cannot use insulin properly – this is referred to as Insulin Resistance. The body will attempt to create extra insulin to make up for the resistance, but eventually, it will be unable to keep up. While Type I is a condition that cannot be prevented, Type II can be offset, managed and even reversed to some degree through a healthy diet and exercise.

Recent studies have shown that those who eat blueberries at least three times a week have cut their risk of developing Type II diabetes by 26 percent, according to a study recently reported upon by the BBC. Because of the amount of fiber and nutrients in the fruit, researchers believe this to affect the development of Type II diabetes. While some people are subject to becoming pre-diabetic because of their genetics, through a healthy diet and exercise – especially a diet that includes blueberries – Type II diabetes could be delayed for months, if not years.

Researchers also conducted a juice versus fruit study as well. Fruit juice removes a lot of the fiber and nutrients provided by the actual fruit, meaning that drinking fruit juice can cause blood sugar levels to rise quickly. Those who ate blueberries instead of drinking fruit as part of the study dropped their risk of developing juvenile diabetes by as much as 33 percent. You can read more information on the juice effect and the overall results of the study on the BBC’s website.

According to Livestrong, eating blueberries can also help you process glucose more efficiently, and may even help to lower blood sugar. There have also been strong correlations in recent studies with rats showing weight loss and belly fat loss. After the rats ate a blueberry-based powder, they showed a lower risk for developing diabetes. The rats’ bodies also adapted to a more efficient method of storing and burning energy.

While there is still research being conducted, we believe that blueberries are a super fruit in more than just their taste. We are passionate about our organic blueberries, and know that the fantastic taste of our berries speaks volumes. They look good, they taste good and they make you feel great!

Learn more about our all-organic blueberries or place an order by contacting Delta Blue Blueberries today!

Isn’t it great when you learn one of your favorite foods also provides a wide array of health benefits? Well, prepare to be excited because one of your most popular fresh and fruity summertime treats is about to get even better. Recent research has found that blueberries can offer benefits for vision and memory. Packed… END_OF_DOCUMENT_TOKEN_TO_BE_REPLACED

Blueberries certainly make a welcome addition to all kinds of breakfast foods. They’re delicious with cereal and oatmeal, and can add an extra healthy twist to your morning smoothie. But why stop there? This sweet and delicious berry pairs great with all kinds of other foods, and one of our recent favorites is this seasonal… END_OF_DOCUMENT_TOKEN_TO_BE_REPLACED

There’s no doubt that blueberries are packed with good-for-you vitamins, minerals and nutrients that can greatly benefit your body. But scientists still aren’t finished uncovering all of the awesome health benefits that these little berries have, and every month, more and more research points to the fact that blueberries may be able to rid your… END_OF_DOCUMENT_TOKEN_TO_BE_REPLACED

Post-traumatic stress disorder is a condition of persistent mental and emotional stress that starts as a result of injury or severe psychological shock. Symptoms of post-traumatic stress disorder (PTSD) include intrusive memories, avoidance, negative changes in thought or mood and changes in emotional reaction. Unfortunately, the intensity of PTSD symptoms often varies over time, and… END_OF_DOCUMENT_TOKEN_TO_BE_REPLACED

There’s no doubt that blueberries are a super fruit that are packed with good-for-you nutrients and vitamins – not to mention the antioxidants – but recent research has shown that there may be a link between blueberries and the prevention of Alzheimer’s disease.   Alzheimer’s affects 5.3 million people, including nearly 50 percent of all… END_OF_DOCUMENT_TOKEN_TO_BE_REPLACED

At Delta Blue Blueberries, we love blueberries, and know that they’re good for each of us. All fruit is good for us, right? Well, did you know that this incredible fruit actually has some special properties that make it one of those super healthy and amazing fruits that we should be eating all the time?… END_OF_DOCUMENT_TOKEN_TO_BE_REPLACED